Step into the world of A Clockwork War and meet Clara, mechanical genius and loving sister. All Clara wants to do is protect her brothers, but in a time of war, that can mean sacrificing a great deal…

Mechanical genius Clara Lissing’s life runs like well-designed clockwork. She tinkers with recalcitrant machines while her brothers work down the mines. Life is organised and peaceful despite the never-ending war between England and Scotland.

But when her baby brother, Tom, joins the army, her happy family life is at risk. Clara goes to London to support the war effort and bring Tom home. Clara should be in her element working to create a device to destroy the Scottish troops, but London brings the distracting presence of young duke, Gordy.

Clara is sure Gordy’s hiding a secret, but as she gets closer to the truth she discovers secrets and lies that go to the heart of government. When powerful people don’t want the conflict to end, does a simple tinker have any hope of finding peace?

The deadly war between England and Scotland rages on, with England placed in peril when powerful Duke Murgatroyd turns traitor, helping the Scots to annihilate London, and kidnap the young king.

Tinker Clara Lissing is determined to launch a rescue mission. She joins forces with the king’s cousin, Gordy, constructing an airship from the wreck of a Scottish machine to sneak across the border and battle their enemies.

The pair quickly learn that enemies abound, and not just in Scotland. The most dangerous part of the mission just might be deciding who they can trust. Can they get close enough to save the king? Or will the murderous Murgatroyd strike again?

Catastrophe has struck. Rather than returning to England in triumph, Clara finds herself injured and alone, imprisoned in Edinburgh castle, unsure whether her friends are even alive.

But the Scots aren’t what Clara imagined. Amputee doctor, Jamie, treats her broken bones instead of adding more. Edinburgh is also a surprise – half-destroyed by bombs that fell the night London was attacked by airships.

As trust grows between the two would-be enemies and secrets are revealed, they start to uncover the depths of Duke Murgatroyd’s treachery. When a revelation about Clara’s past occurs, peace is suddenly within reach. But ending the war will demand everything Clara has to give. Can a simple girl make the sacrifice needed to save her country?

The war is over. With peace finally dawning between England and Scotland, the two countries can lay down their arms and face the future.

Clara has already sacrificed more than she would have thought possible to secure a brighter future for her country. All she wants is to settle into her new life, but danger still lurks.

Murgatroyd remains at large, and Clara is the only person who truly understands the danger he represents. On her own, she cannot stop the devious duke.

But reaching into her past to secure help from an old friend threatens everything Clara has gained. To stop Murgatroyd, Clara must make an agonising decision between past and future, at the risk of her life. 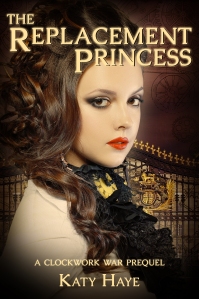 Prequel story, The Replacement Princess, is now available. This short story is your introduction to the world of the clockwork war.